I grew up dancing and acting on New England stages.  I honestly can't remember a time when I wasn't taking dance lessons.  I loved books about performers, going to see plays and, best of all, being in shows. Ballet was my favorite thing, but I was also in a choir and did musicals. My friends and I were such total gleeks that we even created our own theatre company, MWM (we thought it sounded like MGM--the movie company), for which I wrote, composed and choreographed productions. 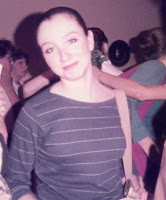 I went to Georgetown University in Washington, DC, and after a couple of misguided semesters as an economics major, received my BA in English (the "degree of least resistance").  While I was in college, I studied playwriting, joined a modern dance company, acted in and choreographed shows--and definitely partied a bit too much (sorry, Mom & Dad)!  After I graduated, I took a job at the Kennedy Center.  I worked in the Theatre for Young People, where I met amazing directors and arts educators and, eventually, choreographed some shows.

As much as I loved my job, after a while I felt a strong desire to study and write some more.  I moved to New York and earned a master's in Performance Studies (the "degree that inevitably requires an explanation") from New York University's Tisch School of the Arts.  And I got married to my college sweetheart (see HOW TO WRITE A KISSING SCENE), whom I met in an undergraduate drama class!﻿ ﻿

As you may imagine, degrees in Performance Studies do not translate directly to gainful employment! But I was lucky.  I answered an ad in the New York Times (yes, an actual print newspaper ad) and got an amazing job at Random House Children's Publishing. It was a world full of books and people who loved them! I had read my way through pretty much the entire children's backlist when I realized that I'd found a focus for my writing: I wanted to join those amazing YA novelists on the shelves. So I found a critique group. Then, I had a baby. I left full-time work for freelancing and had another baby. Wrote a mystery about book publishing, a fantasy about small furry creatures, a very bad middle grade novel about gymnasts, and lots of other stuff--and had a third baby. My husband, boys and I moved to the beautiful Pacific Northwest. I joined SCBWI (which I love) and, you guessed it, had one more baby. They're all boys, in case you're curious!  I also have an adorable boy dog who sits at my feet as I work.


﻿Through all the schools, shows, jobs and kids, I wrote. I took classes in creative writing and playwriting. I went to conferences and learned from writers, editors and agents. At last, I had a novel ready to send out into the world. AUDITION was published on October 13, 2011! Here's the beautiful BOOK TRAILER!

I've skipped a few steps here about the rejection letters I received for other manuscripts, querying agents (giant stomach ache), going on submission and meeting my awesome editor.  I'll share those stories another day. Meanwhile, I continue to enjoy life with my husband and passel of boys, write almost every day, and still choreograph the occasional musical.  My second verse novel, THE SOUND OF LETTING GO, was published by Viking/Penguin on February 6, 2014.
﻿﻿
It is my dream for my kids (and for everyone in this world, including you) to be lucky enough to find something they love to do and the time and opportunity to do it.